©️ ALL RIGHTS GO TO SACRIFIX & THRASH OR DEATH RECORDS

SACRIFIX is a Thrash Metal band from São Paulo, Brazil

► SUPPORT THE BAND / BUY THE ALBUM

Sacrifix was formed in the first wave of pandemic in 2020 by Frank Gasparotto (guitar and vocals) with the main goal to play true old school thrash metal with no gutural voices, no blastbeats, no acoustic guitar, no lyrical voices, no keyboard, the main influences are: Sodom, Slayer, Sepultura, Kreator, Annihilator.

To join forces Frank called his old buddies from a death metal band (Infamous Glory), Kexo on bass and Piza on drums. At the time when Kexo and Piza joined, the recording proccess was in course with Frank doing all instruments and vocals.

The First single “Sacrifix” was released in december 2020 with their first video on youtube.

The album was finished in Febuary 2020 with 9 songs including an Angel Witch cover, Evil Games.

The band´s name was taken from the motion picture “The Gate”, a true classic horror film from the 80s, and the logo was handmaded by Frank itself.

In March an independent label called Thrash Or Death Records got in contact to to sign with the band to release debut album. The deal was done and “World Decay 19” was released in april 13, 2020.
Marcio Aranha was encharged to paint the cover art, a decadent image of time we´re living.

In may a lyric video was released: “Living Hell”.

The Guitar Center Memorial Day sale is here, with up to 40% off killer guitar and bass gear

Fri Aug 27 , 2021
The Guitar Center Memorial Day sale is here, with up to 40% off killer guitar and bass gear Gear up for the return of live music with massive savings on Fender Telecasters, Martin acoustics, Line 6 effects, Ernie Ball strings and loads more Published at Fri, 28 May 2021 18:14:19 […] 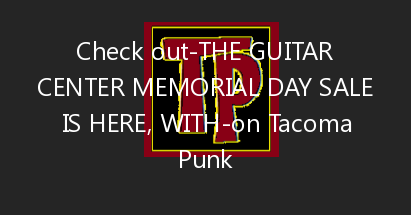